“There is an off road race in Eastbourne next March. Do you fancy it?”

That’s how it started.

I generally say yes to anything. Nothing ventured, nothing gained. I love running. I have run more than a handful of marathons and other road races and have a burgeoning medal collection. But off road has never really appealed to me. I think perhaps it is because I turned my ankle in a nearby country park when i had just started to run back in 2009.

Anyway, i signed up to the race. I didn’t read the details. I never do. I just turn up and do my thing. Anyway, I was thinking, so what.. its a race, its a marathon, the only difference is that it is off-road right?

No actually. Completely wrong as it turned out.

I put in the training. I put in lots of miles on the Pilgrims way in Kent, aided and abetted by my fellow running buddies – Sarah and David who were to be my fellow muddy partners in grime 🙂

Fast forward to a couple of weeks before the race. By now i had found out three amazing facts about the race i was to run.

Fact no. 1 – Total elevation gain the same as Ben Nevis. You know… that big mountain in scotland.

Fact no. 3 – the weather was cold. wet and with little likelihood for improvement by race day.

The weekend before the race, during my mileage taper, i went out with the local Egerton Running Club. I felt terrible. I felt hungover, my legs were stiff, I couldn’t finish the training run of just 7 miles at anything above walking pace.

Just 6 days to do to my first trail marathon and i was in no fit shape. Turned out that i was dehydrated and I suffered for the next two days, too drained to get up from the sofa or the bed. Just my luck i thought. Just like my first ever marathon – Brighton – when i fell to food poisoning which disrupted my whole fuelling strategy beforehand.

Race day was up on us. Our local running club organiser Sarah very kindly gave me and my fellow runners a lift down to the starting point at Birling Gap near Eastbourne. The weather was terrible, hail and snow forecast and cold as siberia. The omens were not great. Anyway, we nervously joked on the journey about just how tough the race would be.

The race HQ was in a field about half mile walk up a path from Birling Gap. Lots of activity at race HQ, last minute adjustments of equipment, clothing, and food for the race. The event was incredibly well organised, we collected our numbers, pinned them to our clothing taking special care not to stab ourselves in the chest.

We opted to start with the Ultra Runners – they were doing over 33 miles. Yikes! We were concerned about the cut-off times – we had to finish within 7 hours 30 minutes of starting otherwise the race would be closed to us. So, we started with the others – 30 minutes ahead of the other marathon runners.

Our plan was to run as far up the hills as possible, run the flats, run down the hills, and while not going hell for leather, certainly keeping up the pace. After embarking on the first hill, which was almost straight after the start, we realised that we would need a change of plan. The ground was just so muddy, and pushing on up the hills was going to be too hard on the legs and on our energy stores. We also soon realised that running down the other side of the hills was impossible for fear of slipping, falling or doing ourselves an injury.

My first fall came just before checkpoint 1 – some 6 miles in to the race. I fell while running down a shallow gradient and managed a full 360 degree roll in the mud. That’s when i felt like a real trail runner.

We got the checkpoint one and were greeted by some supporters from our local group. Brilliant that they could make it to give us some cheering along. We picked up some custard cremes and headed off for the next part of the race.
The next part of the race was pretty – and hilly. Let’s just call it pretty hilly. It involved Seven Sisters and lots and lots of up and hills. Very tough going but completely worth it when we reached the highest point of the race. I almost didn’t make it – i started choking on an energy bar half way up Seven Sisters. Sarah was there thankfully to give me a whack on the back dislodging it from my pipes!

Forest stage was next and we reached checkpoint 2. The great news was that we had done the “tough part” as the checkpoint volunteer described it. More and more jelly babies consumed, more water and off again. I looked at the path ahead – down hill – yay! But, hold on – i was wrong – everyone else was heading up the hill. Typical, whenever there is an easy option and a hard option its always gotta be the hard one.

More up hill, we stumbled on some apparently lost runners. They had run around in a circle and obviously missed the sign for a turn-off. We vowed to be extra vigilante and not to miss the signs. We wouldn’t want to do an extra 3 miles or so.

At around 16 miles we bumped into our supporters again. We stopped for a break, fuelled up and then set off again, meeting up with my wife Susie and our leader Sarah back at Birling Gap, before heading off towards the Belle Tout lighthouse and the last 10 miles or so of the race.

More up hill, lots of wind, great views on the top of the hill and time for a brief photo op. You can see the white cliffs in the background (not dover – but similar). I fell another couple of times before the next checkpoint – which we almost missed – between the Belle Tout and Eastbourne. By this point we had met up with one of our fellow runners Marc.

Checkpoint three saw us shovel a tonne of jelly babies. They were delicious. My body was craving sugar, and strong flavours. The jelly babies were perfect. The best i have ever eaten. I am sure part of it was my race body talking!

Briefly electrocuted myself on an electric fence before heading off for the final stage. Up and more up, lots of mud, snow drifts, and great scenery. The final stretch was up on us. The finish line tantalisingly in sight. I spotted a couple of runners just ahead, and I suggested that we fleece them at the finish line…. and then they turned left – away from the finish. That’s when it hit me – we still had 2 or 3 miles to run.

My legs were increasingly heavy, the time was marching on, we felt quite close to the back of the field. More up hill to do, and i dug in – felt a second wind coming, and I knew that I wanted to finish after giving it a bit more oomph. I fairly sprinted the last part of the race and with the finish line in sight i gave it even more. Raced across the finish line.

An amazing achievement. I loved the race. It was superb. Muddy. Messy. Tiring and exhilarating. An absolutely brilliant first off-road race – and the first of many more. 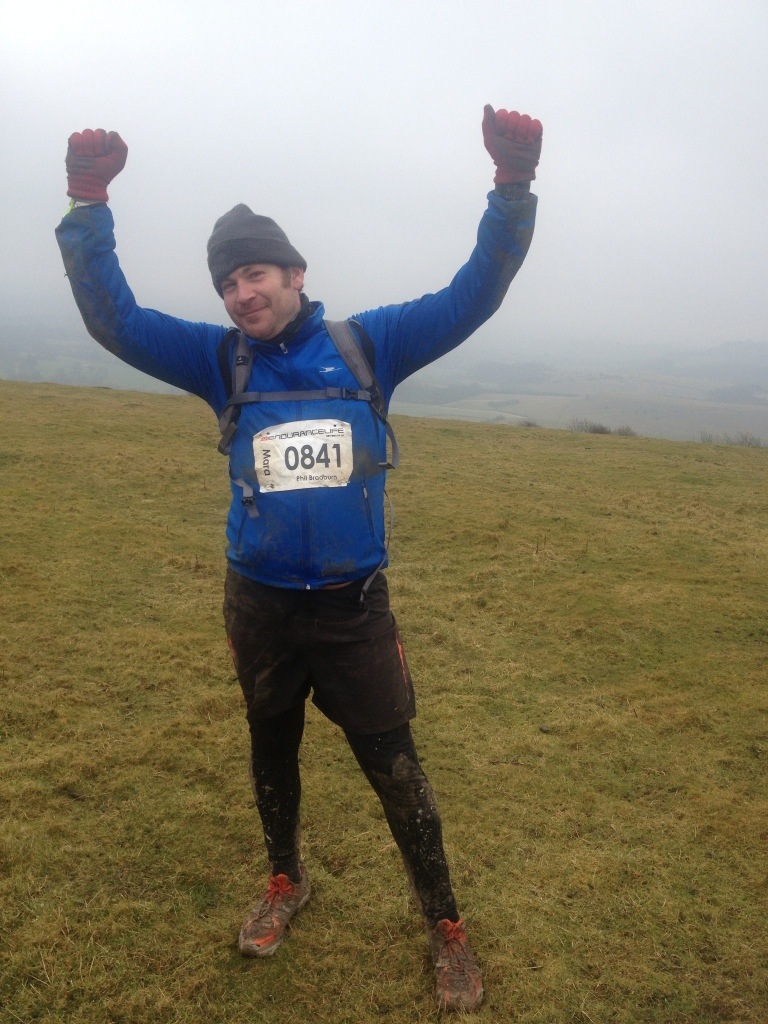